Today, a guest blog from my Aquabirths colleague, Lucy Sangster, who’s been looking into the guidelines.

It’s been good to see that the new Nice guidelines – for care during low risk births – reflects more of the research that so many birth activists have been jumping up and down about for so long.

For example, it says “Do not clamp the cord earlier than 1 minute from the birth of the baby” unless there are serious concerns, and “If the woman requests that the cord is clamped and cut later than 5 minutes, support her in her choice”. That feels like some well needed progress.

The admission that hospital care can create harms seems obvious if you’ve been in the business for years, but the media reaction shows that there’s still a long way to go until everyone takes that on board. Positively, the guidelines have been taken seriously and presented as thoroughly researched. Interestingly, the general media reaction has been complete surprise and inevitably, the counter voices have concentrated on “risk” and “danger”.

The killer quote has to be Cathy Warwick, Chief Executive of the Royal College of Midwives, who said on Radio Four’s Today programme, that midwife led units didn’t work in isolation, that transfer to hospitals was safe and effective if needed, and that outcomes were still better for women who transferred to hospital care than for those who started out in hospital. Considering these transfers are the sudden emergencies and potentially dangerous situations, it is striking that they still do better than women starting out in hospital! (Listen here, from 1:34:30)

In the same feature, Sarah Fishburn, the lay member of the group that worked on the guidelines said that the evidence doesn’t make clear why hospitals lead to worse outcomes, but that other settings tend to be more relaxing, comfortable and with fewer interventions.

Given that the guidelines concentrate on “good communication, support and compassion”, it is however a real shortcoming that the evidence on team midwifery and on continuity of care is not covered. Cathy Warwick said “The guidance as it stands suggests that team midwifery may not be the best model of care. However, recent research shows that team midwifery can help to ensure continuity of carer whilst also delivering other high quality outcomes,” in the Nursing times article.

So will it lead to changes? It’s refreshing to see front pages of the papers talking about the evidence instead of scare stories, but the research on general views about birth has suggested that many women still aren’t aware of this evidence and that it will take more work to change birth culture. Whether the money will follow to create midwife led units in the areas where there isn’t that choice now remains to be seen. Germaine Greer spoke about it this week and said that there’s been a lack of follow through from Government and society on women’s issues that have been ongoing for years… 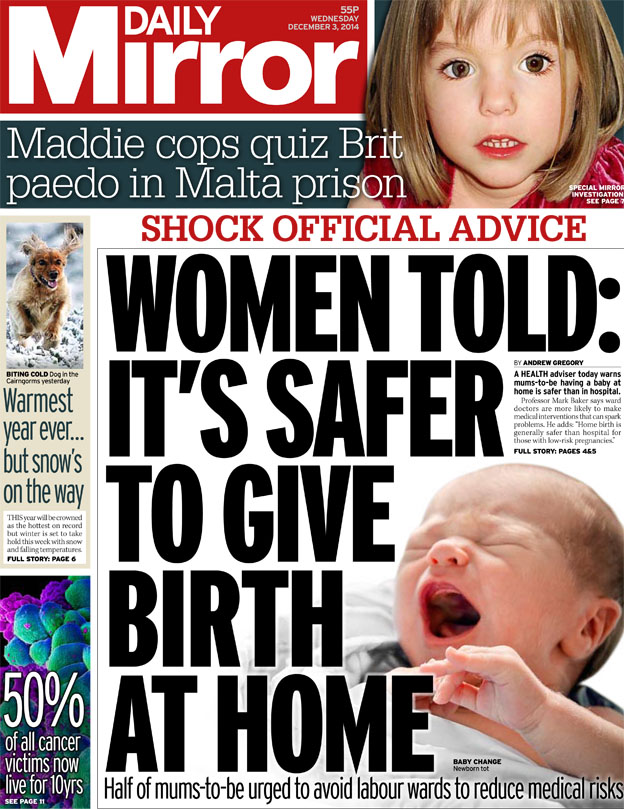 With thanks to the BBC for use of the image of the Mirror front page. There’s also a lovely article from the Telegraph here.